Yakubu Fista was born to a poor family on Glee Anselm. The son of Aiyegbeni and Lunlufe Fista, he learned to become a fighter, becoming very proud of his species. Any bad word directed at his people and he was quick to start a fight. Living among many Anselmi, the species that the Nautolan shared the world with, he got a lot of fighting experience as a child. He became known as a zealous warrior, who while friendly to most, was known be harsh to Anselmi, causing many issues between the two species of Glee Anselm. 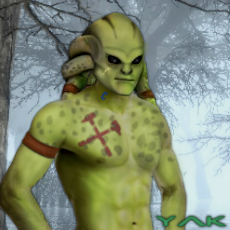 It was decided eventually to exile the young Nautolan to keep peace. Following this exile, he wandered around for some time, unsure of where to go. Soon though, he decided that the greatest issue of the world was not Anselmi against Nautolan, but the struggles of non-humans in a Human centered galaxy. This further radicalized him, especially towards Wookiees who he in particular grew an attachment to.

After weeks of wandering, he found himself in Tresarian space, and found an advertisement for the University of Tresario. He decided to sign up for classes, hoping to find a new purpose here. He soon graduated at the University, and was assigned to the Anzat Core Fleet under the command of Fooj Iwajo, who he became quite fond of. In his first few months at Tresario, he gained a reputation as a strong community member despite his radical ideology. He would participate in the first war games between the Kingdom and the Galactic Empire, and soon gained a columnist position with the Tresarian Dawn with his own advice column called Yak Ask.

Following the end of the war games with the Galactic Empire, Yak decided that military life wasn't for him. Desiring to do something else to help the Kingdom he had grown to love, he applied to the Tresario Salvage Yards, and was accepted, trading in the life of a soldier for the life of a recycler.