Posted on the Galactic News Service on Year 19 Day 56

Bal`demnic (TNN) - The TNN logo covers the screen before fading out to a live feed of a Chadra-Fan reporter standing in a large hall, crowded by individuals from dozens of species. Above the noise of the large crowd, the Chadra-Fan can be heard speaking. “Good evening Tresarians and sentients across the galaxy. This is Chuu’Ruth speaking live at Liberty Hall, inside the heart of the Kingdom. Rumors circulated earlier today that House Tresario would soon make an announcement about their decision regarding the succession of the King. A large crowd has gathered here waiting eagerly to hear their decision. House Tresario, which is made up of the nobility of Tresario, has gathered for the last week to select the new monarch of the Kingdom.” Chuu’Ruth pauses as the murmurs begin to get louder. “And I can see now that several members of House Tresario have walked onto the stage. It appears the leader of the assembly, Lord Xias, is about to make an announcement.” 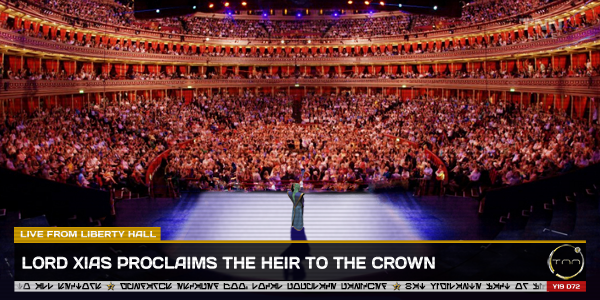 A Falleen in a long black tunic approaches the center of the stage. The crowd settles down as he speaks. “Thank you for gathering today. Though Tresario mourns the loss of a great Falleen, it is our duty to forge a new path forward. It was decided by the Hall of Ministers and the late Sovereign’s personal advisors that it would be best for the Kingdom to have the heir of King Vatz confirmed by the leaders and people of Tresario. It is my pleasure to announce that House Tresario has unanimously agreed to confirm His Majesty, King Alto Rexar as the new Sovereign of Tresario!”

As the crowd cheers, Lord Xias stepped aside, allowing the new Sovereign to address the Kingdom. The Trandoshan confidently steps up to the podium and looks out to the audience.