Clive Redrum is Codru-Ji male Ministry of State officer. Currently serves directly to the Premier of Tresario in the Office of the Premier, he was Commanding Officer of Tresario Core Fleet until his resignation from the Tresarian military in Year 19 Day 186. He is a member of Tikiar Order and was inducted into Order of Tresarian Freedom as Colonel. He was born in Tatooine on Year -15 Day 216. He has sworn brothers across the galaxy, his notable sworn brother is Wise Huang.

"My brother always gazing those star for hours, and nobody knows why.."
— Clavin Redrum

Clive Redrum was born during the early era of Galactic Empire formation, son of Aved Redrum a Corellian trader pilot and Shyll Redrum (née Fogrunner) who both were reputable trader hail from Tatooine. His parents business, Redrum Network (RedNet) grow thriving in the Outer Rim shipping industry and had become wealthy and influential enough within Outer Rim society. His family wealth ensured a pleasant childhood for Clive and his siblings. In his early years he traveled around the trade routes with his family. Since then, he grow fond of his surrealistic love with the galaxy and often amazed with natural phenomenons around the universe.

"The greatest happiness a father can experience.. is to see his son surpass himself.."
— Aved Redrum to Clive Redrum

As he grew up, he helped his family's business as one of RedNet freighter pilot. Ambitious young pilot, Clive never wanted to simply inherit a cushy job in his family shipping company. He wanted to prove himself as a capable starship pilot on his own term, and had worked his way up through the rank. When the second Galactic Civil War took place in the galaxy, his family's business slowly deteriorated. His older brother Clavin was died in unusual hyperspace accident onboard Bulk "Red Erebus", made his parents deeply grieved in shock at the sudden loss of Clavin. Later, RedNet went bankrupt and Clive was forced to leave his last job to seek another opportunity on the other side of the Galaxy. Around Year 10, he met an extremely skilled Advozse pilot, Xynkro Velocio who inspired him to put an effort to end the war in a warrior way. The Advozse was born in powerful connection with the Force. Clive was not a Force Sensitive at this time, but he always considered Xynkro as his mentor, although Xynkro stated their relationship was better sees as brother-like relationship. Later, both were decided to join the Falleen Federation and was enlisted to Ichigo Military Academy above Planet Falleen.

Clive was assigned to Joan Makrefolt as his instructor during his time at the academy. There, he met a fellow academy students, Wise Huang and Rayner Vanguard. Their connection grew closer and soon they became his sworn brothers. On his graduation he decided to enlist the Federation Army along Wise and was promoted to Sergeant. He was assigned to serve 1st Falleen Army Brigade under the command of Federation's Deputy Minister of Defense, Xias. 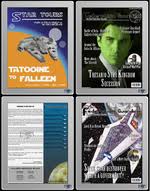 His first mission consisted scouting and capturing any sign of hostile bases or armies. As a soldier, Clive showed a selfless devotion to duty and always respected his chain of command. He worked through the rank and eventually reached the rank of Major and promoted to lead the first brigade as Executive Officer.

Spent years in the Federation, he joined the Federation's art team as an artist. Among his co-workers were the very well known Jedi, Onasha Katr. The Federation ordered Chief Editor of Falleen News Network, Lucas Wissen to re-publish a defunct Falleen Guardian Magazine with a new format to adjust its current trend. Clive was invited and assigned as the magazine layout designer. Although the magazine had two issues finished and was ready to be published, but Falleen Guardian never went public, the main reason was still unknown to Clive. He also befriended a droid-lover Jawa named Kaskus Vico, senior Falleen Navy officer, Kenji Occho and fellow 1st Brigade members, Razren Vaith. All of them were a regular on the local cantina, and always spent their free time playing sabacc game.

During Tresarian-Falleen conflict, Tresario Star Kingdom was decided to secede from Falleen Federation and become an independent sovereign government. Several months later, a large group of Federation citizens changed their allegiance to Tresario's newly crowned King, Jude Vatz. Most of this newly joined people was from Falleen Army, Clive was one of them. Tresarian Army was formed and Clive was assigned to the newly created 1st Tresarian Brigade. Parted with most his sworn brothers, Clive hoped they will meet again soon.

"A man's got to pick the winning side if he wants to live..."
— Clive Redrum

"Door installation service should do the trick!"
— Wise Huang to Clive Redrum

Clive with his MMO Navy flightsuit 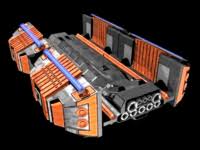 A tribute for his brother's BFF-1 Bulk Freighter Red Erebus. Although his brother's Bulk was mostly painted in red, Erebus was predominantly painted in silver grey with orange as its secondary color. The cockpit of Erebus was modified by Clive to be more comfortable than a regular one, and sometimes a pilot who rode the Bulk will get sleepy while on hyperspace.

"If its painted in Amethyst colour scheme I would gladly to buy your ship."
— Kaja Teno 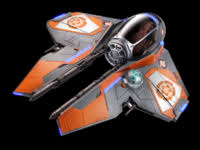 "I owe the Tenka Fubu a lot, she's always save my time when any other ship would have me stranded in boring hyperspace for days."
— Clive Redrum

The fastest ship on Clive's armada. ETA-2 Light Interceptor Tenka Fubu was once a Jedi vessel before it was won by Clive from an avid Jedi artifact collector, Grackus the Hutt in a sabacc game. The ship paint was modified by Clive himself. The main color of his ETA-2 was silver grey while it had some orange color on both wing and front of the ship. It also had flower pattern logo attached on the wing. 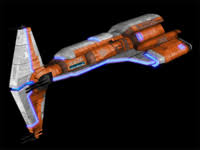 "She's exquisite! Just look at the design of the ship, its truly one of the most successful warship design in galactic history!"
— Clive Redrum

His fanatical love for this ancient war vessel, always made him spew some stories about heroism and valor of the Hammerhead-class cruiser during Old Republic era. The Orizzonte was purchased by Clive from Jimmy Roggeman's Eclipse Shipyard around Year 17 CGT. The Orizzonte included of Clive's personal riflemen and some other smaller vessel like Y-wings and Delta-class. Like Clive's other vessels, Orizzonte main body was predominantly orange in color with silver as secondary color.