Captain Tresario wears a costume that bears Ministry of Military Operations insignia, and is armed with heater-shape shield that virtually indestructible under normal conditions. Later the shield was redesigned as circular-shape with Tresario Star Kingdom Star insignia in the middle of the shield. The popularity of the super-soldier has led to a film, with Navy officer Wedge Cornely playing Captain Tresario in Captain Tresario: Birth of Freedom. In the film, Captain Tresario is depicted as the alter ego of Steve Green, a name inspired by famous Tresarians, Steve Sphinx and John Green.

Captain Tresario first emerged as a running joke among the members of the Tresario Star Kingdom Navy. A larger-than-life figure who embodied heroism and patriotism, he began merely as an affectionate caricature of one of the more popular navy members. Over time, however, he came to be touted as the hidden reason behind anything from the unclogging of a toilet, to the victory over enemy forces at Serroco. Today, Captain Tresario has become firmly rooted in the culture of Tresario's Navy.

Captain Tresario embodies the Tresarian virtues of loyalty, brotherhood, leadership, and ingenuity. He is unwaveringly patriotic, and his only desire is to spread freedom across the galaxy.

Among Captain Tresario's many abilities are his overwhelming strength in personal combat, his unparalleled skill in piloting all types of ships, his peerless understanding of engineering, and his incomparable abilities as a diplomat.

Captain Tresario is not a Force sensitive. His abilities stem from his zealous patriotism and unbridled love of freedom which have elevated him to the pinnacle of what can be achieved by mere mortal flesh. 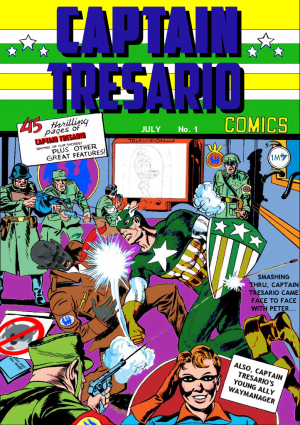 Captain Tresario was an instrumental force on the battlefield during Operation Windy Cadence, a small conflict that occurred on the planet Serroco between Death Watch mercenaries and Tresarian military forces. Navy members report seeing him singlehandedly drive back countless Mandalorian grunts before forging through the front lines to strike a crippling blow against Death Watch leader Peter Max. This image has been immortalized on the pages of an amateur comic book released by Captain Tresario fans in the wake of the Tresarian victory at Serroco.

Captain Tresario also played a crucial role in the retrieval of a dozen Imperial Stormtroopers who had been captured by Death Watch. Despite the official reports crediting Admiral Xyler Zero as the leader of the rescue squad, navy members swear to have seen Captain Tresario spearheading the charge and personally saving the troopers from an ignominious end as Peter Max's human shields.

Captain Tresario's acts of heroism extend to Tresarian animals as well as sentient beings. One of Captain Tresario's early adventures involved the daring rescue of a Tresarian yak that had wandered far into the wilderness of Anzat IV. The desperate plight of this lost creature resonated with the Spirit of Brotherhood in Captain Tresario's heart and spurred him to immediately forge deep into the Anzati jungle on his bold rescue mission. Upon finding the escaped yak, Captain Tresario hoisted it onto his shoulders and set out on the journey back home. By channeling his indomitable will born from his boundless love of Tresario, Captain Tresario carried the yak for three days without rest, returning it to its owners in record time.